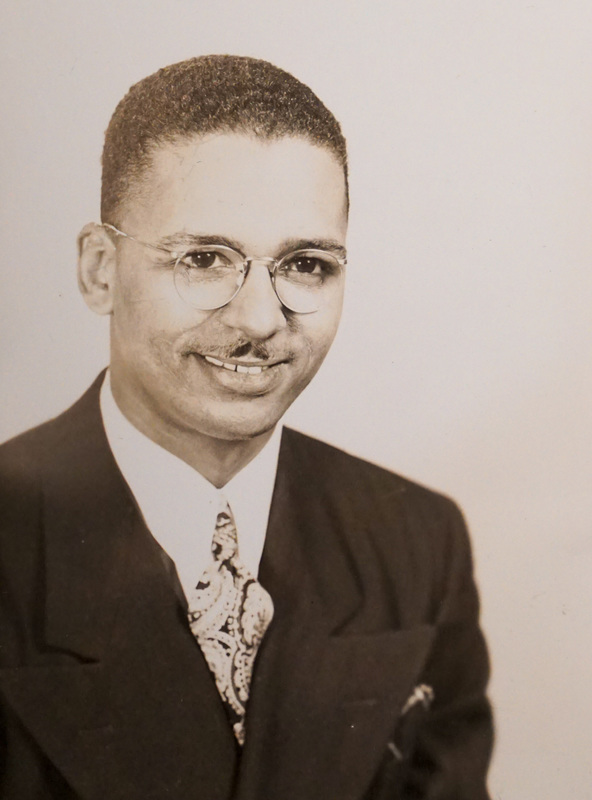 Photograph of Arthur M. Johnson in 1943.

Arthur M. Johnson was born in Atlantic City, New Jersey, on June 4, 1919. He was the son of Frederick W. and Lillian Johnson. Known to his friends as “Art” or “Artie,” Johnson attended Atlantic City High School and graduated in 1936. Johnson’s father worked in law enforcement, and his working-class family could not afford to pay for college. Johnson was admitted to Rutgers in 1939 and sought a state scholarship to attend the university. R. T. Lockett, Executive Secretary of the Arctic Avenue YMCA (an African American branch of the Young Men’s Christian Association in Atlantic City) recommended Johnson for a scholarship, describing Johnson as a “fine, ambitious and hard working” young “leader,” and writing that his parents were “ordinary working people” and that Johnson “can expect very little assistance from them, in fact... at times he has been of material assistance to them.”

Johnson was initially denied the state scholarship and told by school officials that they could not consider his application because he did not graduate high school in the upper half of his class, which was a key condition of the state scholarship fund. Curiously, a letter to Rutgers from the Atlantic City High School Principal indicates that this was not the case and that Johnson did, in fact, graduate in the upper half of his class. In July 1939, Frank S. Farley intervened, writing to Dean Fraser Metzger on Johnson’s behalf. Farley was a Republican politician from Atlantic City who was a state assemblyman at this time (he would go on to serve as state senator for 31 years and is regarded as one of New Jersey’s most influential politicians in the twentieth century). Assemblyman Vincent S. Haneman also inquired about Johnson’s situation. Dean Metzger quickly changed course and offered Johnson assistance of $100 a year from the General Scholarships fund. On August 8, 1939, Johnson wrote to Dean Metzger, “I accept with profound gratefulness your scholarship. I am deeply indebted to the University for its liberal consideration.” Farley continued to write to the dean about Johnson throughout his time at Rutgers. 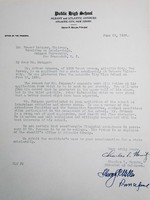 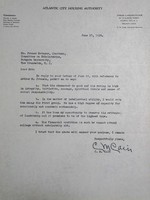 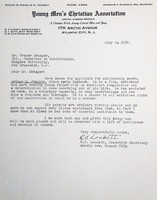 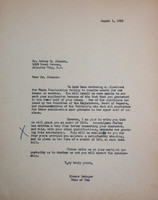 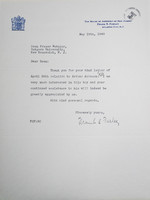 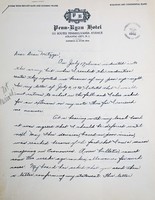 Letter from Johnson regarding the draft, July 1942

Reply from Dean Metzger regarding the draft, July 30, 1942

Arthur M. Johnson entered Rutgers as a freshman in the fall of 1939, alongside Harry Hazelwood Jr. and Walter G. Alexander II (Ernest S. Baxter and Simeon F. Moss were the two black upperclassmen on campus at the time). Johnson pursued a Bachelor of Arts degree in economics. He also threw himself into extracurricular activities on campus. He participated in 150-pound football and boxing in his early years at Rutgers, but by his junior year, he was focusing more on academic clubs such as the Economics Society and the History and International Relations Club. His main interest was debating, and he participated in the debate team together with Harry Hazelwood Jr. He won an award for oratory in 1942 and was elected vice-president of Tau Kappa Alpha, the national honorary forensic society that recognized outstanding achievements in public speaking. He also joined the Omega Psi Phi Fraternity while he was a student at Rutgers.

In July 1942, Johnson was drafted into the Army to serve in World War II and wrote to Dean Metzger that he could not return to school. But he subsequently received a deferral because of his poor vision, and he was allowed to return to Rutgers to complete his degree. 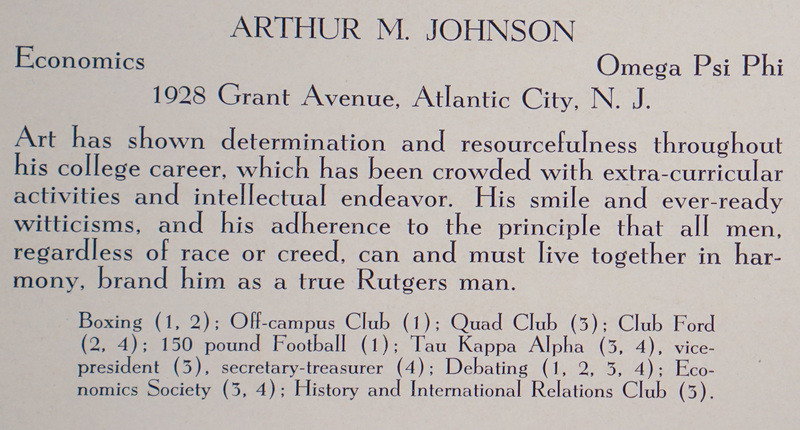 After graduating from Rutgers in 1943, Johnson went to work for the Eastern Aircraft division of General Motors in Trenton, New Jersey. When Eastern Aircraft wrote to Rutgers for a reference, Dean Metzger wrote about Johnson, “he is colored, but has an unusually pleasing personality,” and “he was among the leaders on the campus, insofar as opportunities permitted.”

After a year at the aircraft plant, Johnson pursued graduate study at the University of Pennsylvania. He received an MA in Economics and Business Administration in 1946. He then went on to teach business and economics, moving frequently between different historically black colleges and universities. He taught at Morgan State College in Maryland, Bluefield State College in West Virginia, Florida A&M, Prairie View A&M in Texas, Virginia State College where he coordinated the Small Business Clinic, and Wilberforce University in Ohio where he was the head of the Business Administration department.

In the late 1950s, Johnson was back in New Jersey working as an instructor in economics at University College (Rutgers’ continuing education school for adults in Newark). In 1959 he was appointed a field representative for the Citizens Committee for College Opportunities, a position where he worked to improve educational opportunities for minority groups in New Jersey. In the 1960s, he worked as an assistant professor of economics at the U.S. Coast Guard Academy in New London, Connecticut, and then went to work as a senior economic analyst for Philco Corporation in Philadelphia.

Johnson was 47 years old when he resigned from Philco to join Howard University faculty as a professor of economics. He was to start at Howard on January 3, 1967, but he suffered a massive heart attack at his home in Philadelphia and died on the eve of starting his new position.

The connections Arthur M. Johnson made with other black students at Rutgers remained important to him for the rest of his life. When Johnson passed away, it was his classmate Harry Hazelwood Jr. who informed the alumni association of Johnson’s untimely death. Hazelwood, in turn, heard the sad news about “Artie” from Leroy Darkes RC1946, a fellow African American student from Atlantic City who was a freshman when Johnson was a senior at Rutgers. 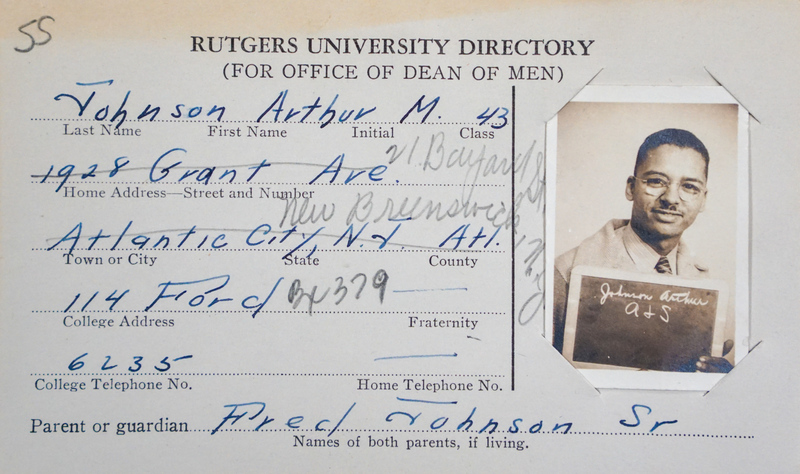 Arthur M. Johnson, photo and information card from the Office of Dean of Men.

Index card about Johnson by a fellow student 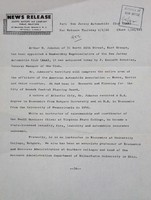 July 10, 1967, letter from Harry Hazelwood Jr. about the passing of "Artie" Johnson