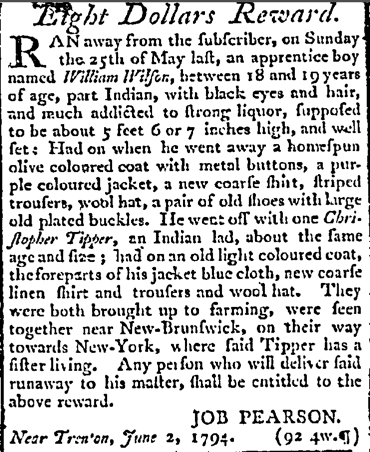 William Wilson, an Indian apprentice, ran away from his master Job Pearson in Trenton. His master offers eight dollars reward for Wilson's capture. Wilson was seen passing through New Brunswick on his way to New York.

Ran away from the subscriber, on Sunday the 25th of May last, an apprentice boy named William Wilson, between 18 and 19 years of age, part Indian, with black eyes and hair, and much addicted to strong liquor, supposed to be about 5 feet 6 or 7 inches high, and well set; Had on when he went away a homespun olive coloured coat with metal buttons, a purple coloured jacket, a new coarse shirt, striped trousers, wool hat, a pair of old shoes with large old plated buckles. He went off with one Christopher Tipper, an Indian lad, about the same age and size; had on an old light coloured coat, the foreparts of his jacket blue cloth, new coarse linen shirt and trousers and wool hat. They were both brought up to farming, were seen together near New-Brunswick, and on their way towards New-York, where said Tipper has a sister living. Any person who will deliver said runaway to his master, shall be entitled to the above reward.