TAKEN UP [pickup notice for John] 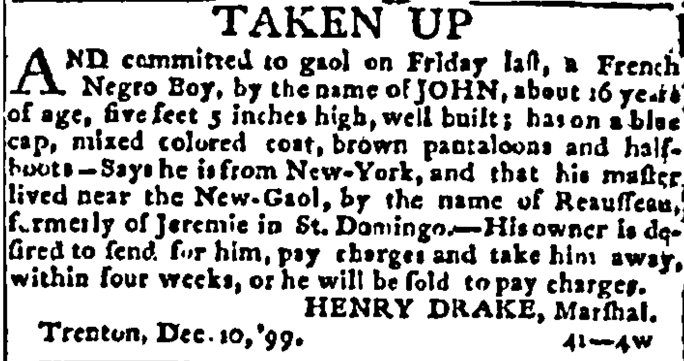 TAKEN UP [pickup notice for John]

John, a 16-year-old black boy, was captured and held at the state penitentiary in Trenton in December of 1799 as a runaway. Henry Drake, the marshall of the prison, posts a pickup notice about John's capture and requests John's master to pick him up within four weeks. John is described as a "French Negro Boy" and his master, Reausseau, came to New York from Jeremie (in present-day Haiti).

TAKEN UP
AND committed to gaol on Friday last, a French Negro Boy, by the name of JOHN, about 16 years of age, five feet 5 inches high, well built; has on a blue cap, mixed colored coat, brown pantaloons and half-boots—Says he is from New-York, and that his master lived near the New-Gaol, by the name of Reausseau, formerly of Jeremie in St. Domingo.—His owner is desired to send for him, pay charges and take him away, within four weeks, or he will be sold to pay charges.
HENRY DRAKE, Marshal.
Trenton, Dec. 10, '99. 41-4w.