STOP THE RUNAWAY! [Will Rigg] 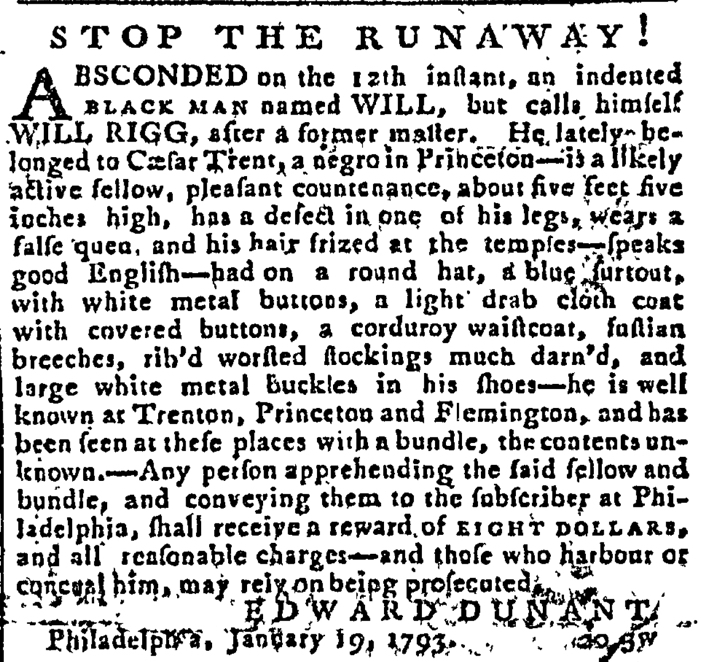 STOP THE RUNAWAY! [Will Rigg]

Will Rigg, an indented black man, ran away from his master Edward Dunant of Philadelphia on January 12, 1793. In the following week, Will Rigg has been seen at Trenton, Princeton, and Flemington, where he is well known to residents. Edward Dunant offers a reward of $8 for Will Rigg's capture.

This notice was originally issued on January 19, 1793, one week after Will Rigg's departure.

ABSCONDED on the 12th instant, an indented black man named WILL, but calls himself WILL RIGG, after a former master. He lately belonged to Caesar Trent, a negro in Princeton—is a likely active fellow, pleasant countenance, about five feet five inches high, has a defect in one of his legs, wears a false queu and his hair frized at the temples—speaks good English—had on a round hat, blue surtout with white metal buttons, a light drab cloth coat with covered buttons, a corduroy waistcoat, fustian breeches, rib'd worsted stockings much darn'd, and large white metal buckles in his shoes—he is well known at Trenton, Princeton and Flemington, and has been seen at these places with a bundle, the contents unknown.—Any person apprehending the said fellow and bundle, and conveying them to the subscriber at Philadelphia, shall receive a reward of EIGHT DOLLARS, and all reasonable charges—and those who harbour or conceal him, may rely on being prosecuted.