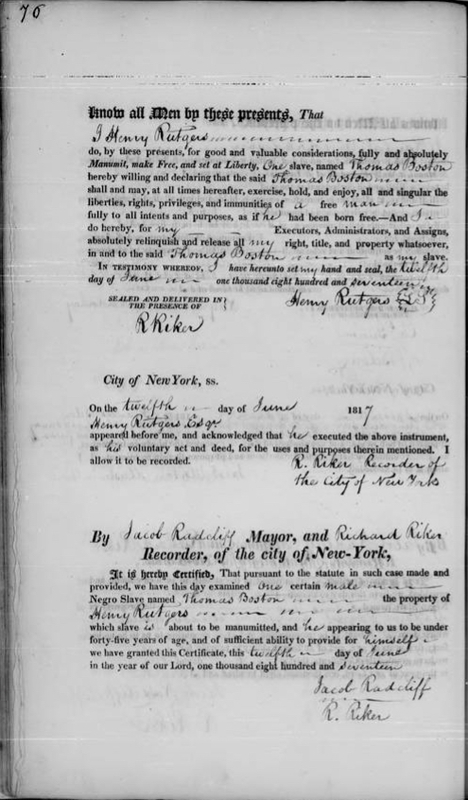 Deed of manumission dated June 12, 1817, with which Henry Rutgers manumits an enslaved man named Thomas Boston. Sealed and delivered in the presence of Richard Riker, and certified by Richard Riker and Jacob Radcliff.

Know all Men by these presents, That
I Henry Rutgers
do, by these presents, for good and valuable considerations, fully and absolutely Manumit, make Free, and set at Liberty, One slave, named Thomas Boston hereby willing and declaring that the said Thomas Boston shall and may, at all times hereafter, exercise, hold, and enjoy, all and singular the liberties, rights, privileges, and immunities of a free man fully to all intents and purposes, as if he had been born free.—And I do hereby, for my Executors, Administrators, and Assigns, absolutely relinquish and release all my right, title, and property whatsoever, in and to the said Thomas Boston as my slave.
IN TESTIMONY WHEREOF, I have hereunto set my hand and seal, the twelfth day of June one thousand eight hundred and seventeen.

SEALED AND DELIVERED IN }
THE PRESENCE OF }
R. Riker

City of New York, ss.
On the twelfth day of June 1817
Henry Rutgers Esqr. appeared before me, and acknowledged that he executed the above instrument, as his voluntary act and deed, for the uses and purposes therein mentioned. I allow it to be recorded.

R. Riker Recorder of
the City of New York

By Jacob Radcliff Mayor, and Richard Riker
Recorder, of the city of New-York,
It is hereby certified, That pursuant to the statute in such case made and provided, we have this day examined one certain male Negro Slave named Thomas Boston the property of Henry Rutgers which slave is about to be manumitted, and he appearing to us to be under forty-five years of age, and of sufficient ability to provide for himself we have granted this Certificate, this twelfth day of June in the year of our Lord, one thousand eight hundred and seventeen.