The Klan comes to Middlesex County

In the wake of World War I, black Northern migration, post-war nationalism, industrialization, and urbanization all served to incite the resurgence of the Ku Klux Klan. Established near Atlanta, Georgia in 1915, the “second Klan” would ultimately attract approximately 60,000 members in the state of New Jersey. While the Klan made its presence known in other New Jersey towns like Hoboken, Paterson, and Bayonne in the early 1920s, New Brunswick was comparatively slow to witness overt Klan activity. 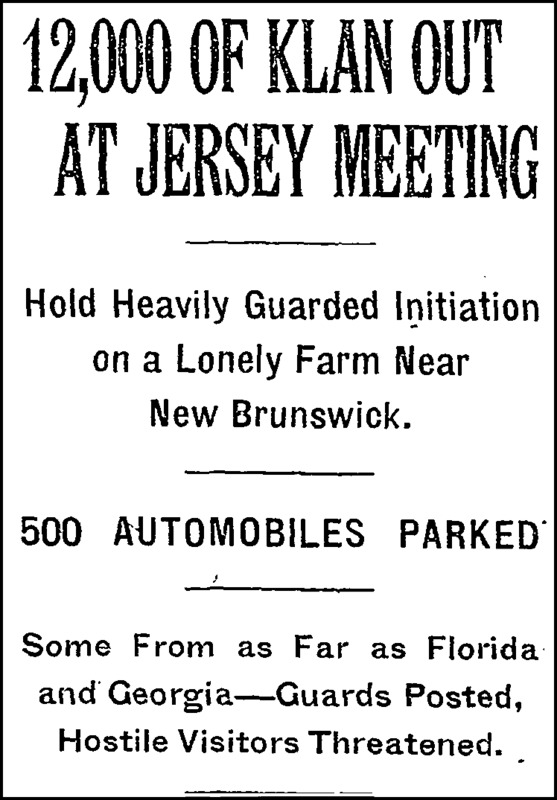 Then on the evening of May 2, 1923, the Klan organized a massive initiation ceremony on the farm of John Hobbs, five miles northwest of downtown New Brunswick. Believed to be one of the largest Klan ceremonies to date on the East Coast, reporters estimated between 6,000 and 12,000 individuals in attendance, with over 1,000 receiving initiation rites. Klan organizers instructed all attendees to attach prominent white ribbons or handkerchiefs to their cars and to drive a designated route directly through downtown New Brunswick. A New York World reporter observed, “There was never a time between 10 o’clock and midnight when the main streets of New Brunswick were not filled with the slow-moving processions… there are many Negroes in New Brunswick’s population. They vanished from the streets soon after 10 o’clock.” 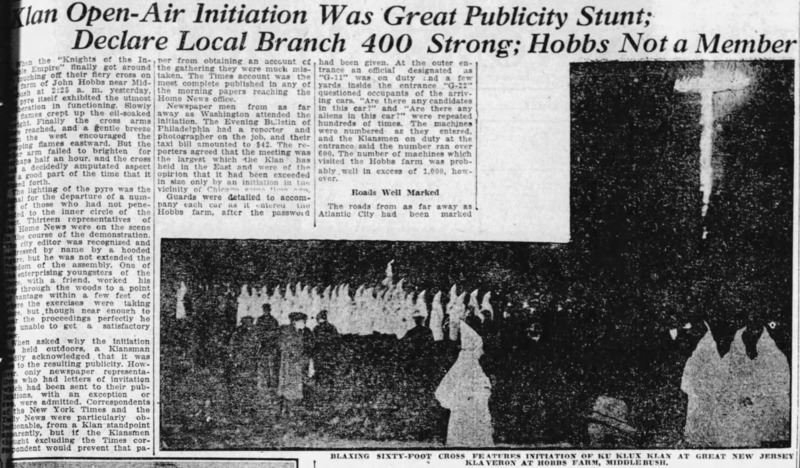 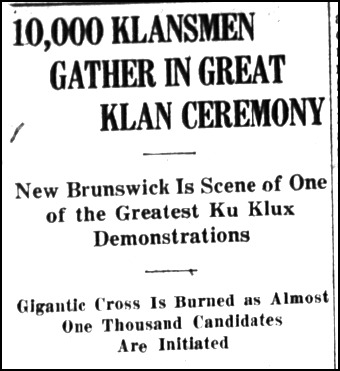 The racist ideology driving the New Jersey Klan became explicit during the initiation ritual, when inductees were instructed to place their right hand over their hearts and pledge themselves to the maintenance of “white supremacy.” To signal the close of the ceremony, Klansmen set fire to a sixty-two-foot cross that could reportedly be seen up to seven miles away. In the following days, Klan newspapers designated the New Brunswick ceremony, “One of the Greatest Ku Klux Demonstrations,” and claimed that “a new respect for the Klan has developed here since the public has seen visual evidence of the extent to which true Americans have rallied to its banner.”