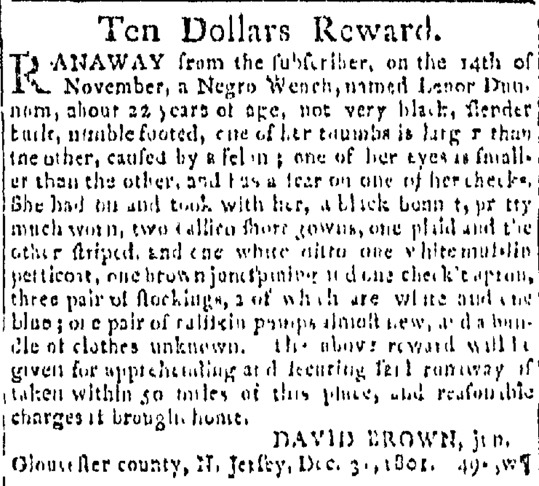 Lenor Dunnam, a black woman aged 22, ran away from slaveholder David Brown in Gloucester County on November 14, 1801. The slaveholder offers a reward of $10 for her capture. This notice was published recurrently in the Trenton Federalist newspaper at least until January 10, 1802, which was 2 months after Lenor Dunnam's escape.

Ten Dollars Reward.
RAN AWAY from the subscriber, on the 14th of November, a Negro Wench, named Lenor Dunnam, about 22 years of age, not very black, slender built, nimblefooted, one of her thumbs is larger than the other, caused by a [undecipherable]; one of her eyes is smaller than the other, and has a scar on one of her cheeks. She had on and took with her, a black bonnet, pretty much worn, two callico short gowns, one plaid and the other stripped, and one white [undecipherable] one white muslin petticoat, one brown [undecipherable], three pair of stockings, 2 of which are white and one blue; one pair of [undecipherable] and a bundle of clothes unknown. The above reward will be given for apprehending and securing the runaway if taken 50 miles of this place, and reasonable charges if brought home.
DAVID BROWN, jun.
Gloucester county, N. Jersey, Dec. 31, 1801. 49 - 3w