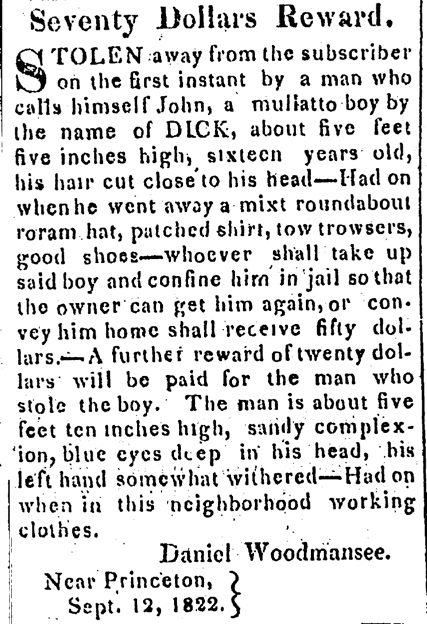 Dick, a 16-year-old enslaved boy, left the house of his master Daniel Woodmansee, near Princeton, on September 1, 1822. Woodmansee posts a notice that Dick was "stolen away" by a man named John. The notice describes Dick as a "mulatto boy" and John as a man of "sandy complexion" with "blue eyes." Daniel Woodmansee offers a reward of $50 for Dick's capture and return and an additional reward of $20 for the capture of John.

Seventy Dollars Reward.
STOLEN away from the subscriber on the first instant by a man who calls himself John, a mullatto boy by the name of DICK, about five feet five inches high, sixteen years old, his hair cut close to his head—Had on when he went away a mixt roundabout roram hat, patched shirt, tow trowsers, good shoes—Whoever shall take up said boy and confine him in jail so that the owner can get him again, or convey him home shall receive fifty dollars.—A further reward of twenty dollars will be paid for the man who stole the boy. The man is about five feet ten inches high, sandy complexion, blue eyes deep in his head, his left hand somewhat withered—Had on when in this neighborhood working clothes.
Daniel Woodmansee.
Near Princeton,
Sept. 12, 1822