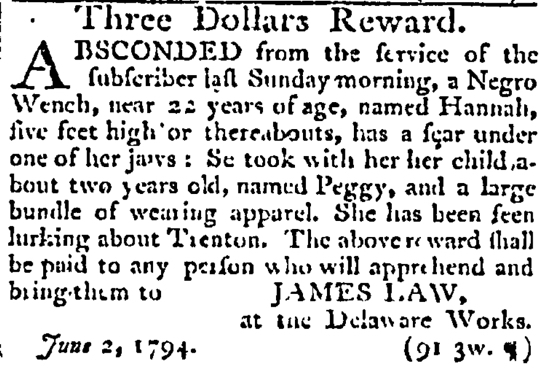 Hannah an enslaved black woman, aged 22, ran away with her 2-year-old daughter Peggy and took a large bundle of clothing. Her master James Law (from Delaware Works) offered a 3 dollar reward for Hannah's capture.

Delaware Works was a mill property located in Morrisville, Bucks County, Pennsylvania, across the river from Trenton, New Jersey.

ABSCONDED from the service of the subscriber last Sunday morning, a Negro Wench, near 22 years of age, named Hannah, five feet high or thereabouts, has a scar under one of her jaws : She took with her her child about two years old, named Peggy, and a large bundle of wearing apparel. She has been seen lurking about Trenton. The above reward shall be paid to any person who will apprehend and bring them to JAMES LAW,

at the Delaware Works.