This collection contains a selection of images that appeared in the pages of the Chanticleer, a humor magazine published by Rutgers students in the 1920s. These cartoons and drawings include a range of racist caricatures, Sambo and Mammy figures, and other representations of black characters as punchlines. A cartoon printed in the inaugural issue of the magazine mocks the terrifying act of lynching (see An Old-Fashioned Necking Party). Advertisements in the magazine included a cigarette ad featuring a comedian in blackface (see Old Gold cigarettes advertisement featuring Eddie Cantor). These images provide a window into the visual culture that white college students produced and consumed in the 1920s.

Wherever possible, we have identified the authors of these images by their cartoonist signatures. Perhaps the most notable contributor is Ozzie Nelson (Oswald George Nelson), Rutgers class of 1927, who later became famous as the co-creator of the long-running radio and TV show The Adventures of Ozzie and Harriet (see cartoons by Ozzie Nelson). Nelson was inducted into the Rutgers Hall of Distinguished Alumni in 1989. Other student cartoonists featured here include Frederick W. Shaw (class of 1924), Frank S. Amon (class of 1927), Carroll A. Badeau (class of 1928), William B. Schimmel (class of 1928), Jack Johnstone (class of 1929), Frank K. Herdling (class of 1931), and Frederick M. Harrison (class of 1932).

The magazine was established in 1923 and ran until 1929. Chanticleer was the name of a medieval fable character—a fighting rooster—that served as the Rutgers mascot at the time (the Scarlet Knight mascot was adopted by the school in 1955). Original issues of the magazine have been preserved by the Rutgers Special Collections and University Archives.


View all items in this collection sorted by date.

Cartoon depicting a lynching printed in the inaugural issue of the Chanticleer, a humor magazine established by Rutgers students in 1923. The cartoon depicts a man's lifeless body hanging from a tree as three observers look on. The caption below the… 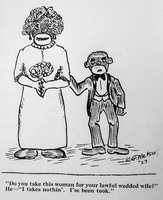 Cartoon printed in December 1924 in the Chanticleer, a humor magazine produced by Rutgers students. The image is a caricature of a black couple in wedding attire. The caption below in the image reads: "Do you take this Woman for your lawful wedded… 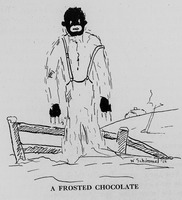 Cartoon printed in February 1926 in the Chanticleer, a humor magazine produced by Rutgers students. The image is a caricature of a black man covered in icicles. The caption below the image reads: "A FROSTED CHOCOLATE." The author of the cartoon is…
View all 23 items