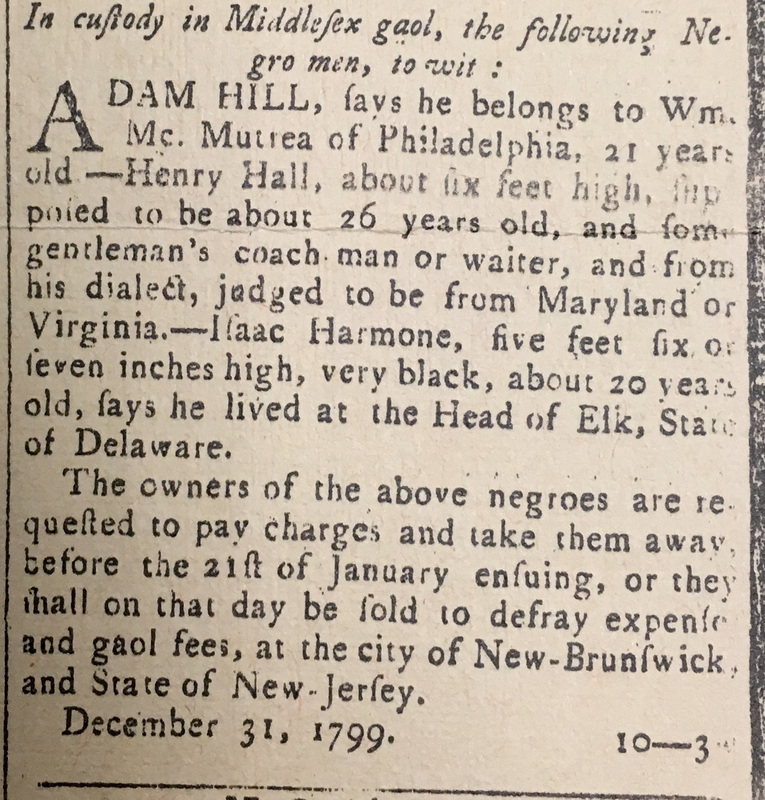 Three black men, Adam Hill, Henry Hall, and Isaac Harmone, were captured and committed to jail in New Brunswick as suspected runaways. The keeper of the Middlesex county jail publishes a notice stating that the three men will be sold by the jailer if their masters do not come forward to claim them by January 21, 1800.

This notice was originally published on December 31, 1799, and was supposed to run for 3 consecutive weeks in the newspaper.

In custody in Middlesex goal, the following Negro men, to wit:

ADAM HILL, says he belongs to Wm. Mc. Mutrea of Philadelphia, 21 years old—Henry Hall, about six feet high, supposed to be about 26 years old, and some gentleman’s coach man or waiter, and from his dialect, judged to be from Maryland or Virginia.—Isaac Harmone, five feet six or seven inches high, very black, about 20 years old, says he lived at the Head of Elk, State of Delaware.

The owners of the above negroes are requested to pay charges and take them away before the 21st of January ensuing, or they shall on that day be sold to defray expense and goal fees, at the city of New-Brunswick, and State of New-Jersey.