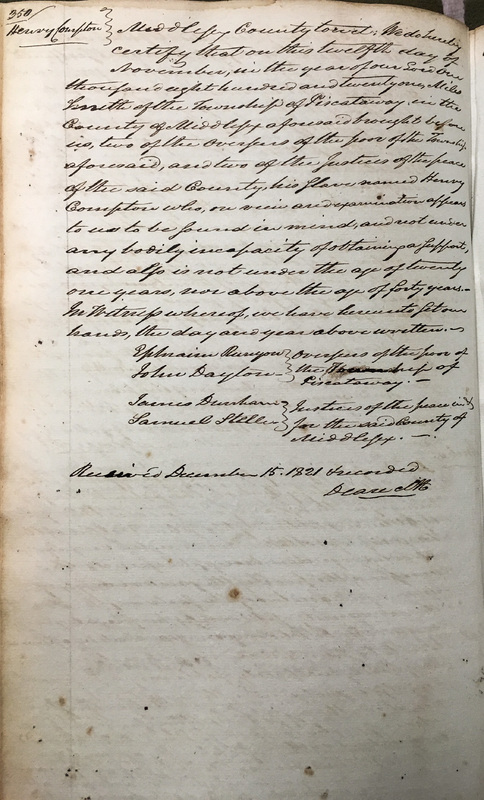 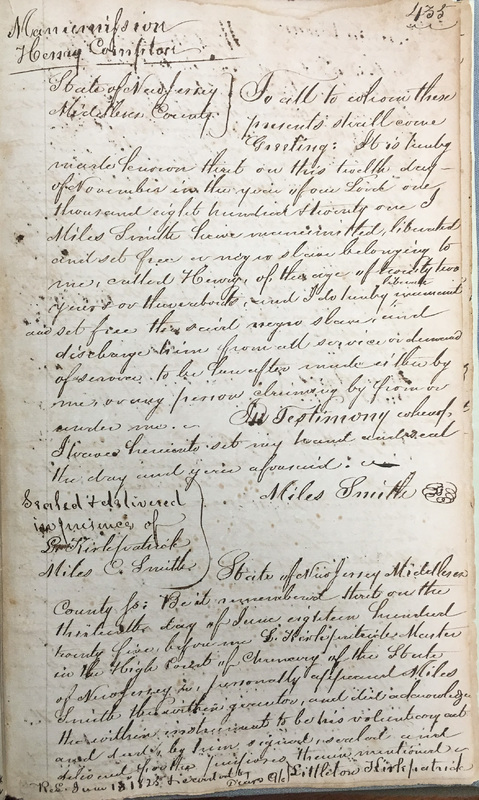 Henry Compton } Middlesex County to wit: We do hereby certify that on this twelfth day of November, in the year of our Lord one thousand and twenty one, Miles Smith of the Township of Piscataway in the County of Middlesex aforesaid brought before us, two of the Overseers of the poor of the Township aforesaid, and two of the Justices of the peace of the said County, his slave named Henry Compton who, on view and examination appears to us to be sound in mind, and not under any bodily incapacity of obtaining a support, and also is not under the age of twenty one years, nor above the age of forty years.—
In Witness whereof, we have hereunto set our hands, the day and year above written.—

Ephraim Runyon }
John Dayton } Overseers of the poor of the Township of Piscataway. —

James Dunham }
Samuel Stelle } Justices of the peace in & for the said County of Middlesex. —

Manumission
Henry Compton
___
State of New Jersey }
Middlesex County } To all to whom these presents shall come Greeting: It is hereby made known that on this twelth day of November in the year of our Lord one thousand eight hundred & twenty one I Miles Smith have manumitted, liberated and set free my negro slave belonging to me, called Henry of the age of twenty two years or thereabouts, and I do hereby liberate manumit and set free the said negro slave and discharge him from all service or demand of service to be hereafter made either by me, or any person claiming by from or under me. — In Testimony whereof, I have hereunto set my hand and seal the day and year abovesaid:

State of New Jersey Middlesex County ss: Be it remembered that on the thirteenth day of June eighteen hundred twenty five, before me L. Kirkpatrick Master in the High Court of Chancery of the State of New Jersey &c, personally appeared Miles Smith the within grantor, and did acknowledge the within instrument to be his voluntary act and deed, by him signed sealed and delivered for the purposes therein mentioned.
Littleton Kirkpatrick