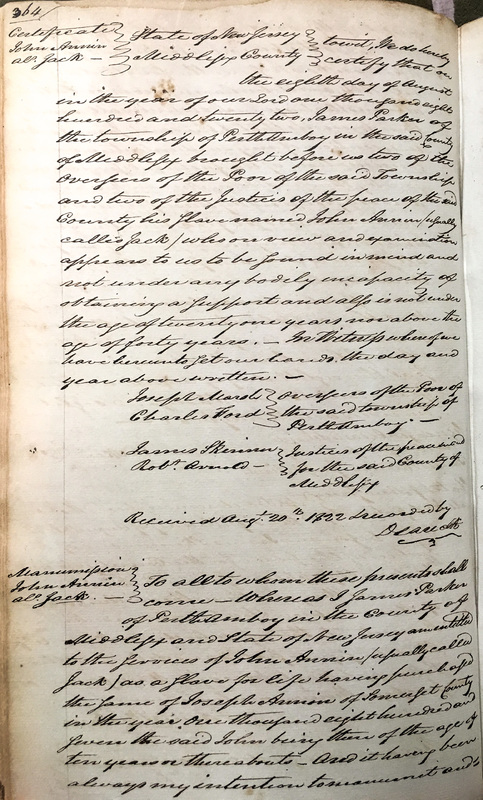 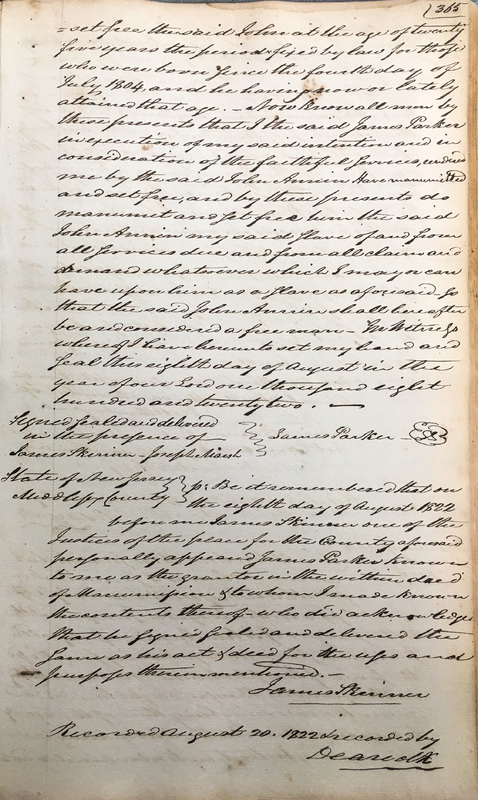 Slaveholder James Parker of Perth Amboy manumitted 25-year-old man John Annin (known as Jack) on August 8, 1822. In his Deed of Manumission, James Parker stated that he had purchased John Annin in 1807 from his former owner Joseph Annin of Somerset County, New Jersey. At the time of this slave sale in 1807, John Annin was a 10-year-old boy, and James Parker promised to manumit the boy on his 25th birthday.

To wit, We do hereby certify that on the eighth day of August, in the year of our Lord one thousand eight hundred and twenty two, James Parker of the township of Perth Amboy in the said County of Middlesex brought before us two of the Overseers of the Poor of the said township and two of the Justices of the Peace of the said County his slave named John Annin (usually called Jack) who on view and examination appears to us to be sound in mind and not under any bodily incapacity of attaining a support and also is not under the age of twenty one years nor above the age of forty years. — In Witness whereof we have hereunto set our hands the day and year above written.

Manumission }
John Annin }
als. Jack }
To all whom these presents shall come— Whereas I James Parker of Perth Amboy in the said County of Middlesex and State of New Jersey am entitled to the services of John Annin (usually called Jack) as a slave for life having purchased the same of Joseph Annin of Somerset County in the year one thousand eight hundred and seven the said John being then the age of ten years or thereabouts, And it having been always my intentions to manumit and -

- set free the said John at the age of twenty five years the period fixed by law for those who were born since the fourth day of July 1804, and he having now or lately attained that age. Now know all men by these presents that I the said James Parker in execution of my said intention and in consideration of the faithful services rendered me by the said John Annin have manumitted and set free, and by these presents do manumit and set free him the said John Annin my said slave of and from all services due and from all claim and demand whatsoever which I may or can have upon him as a slave as aforesaid - so that the said John Annin shall hereafter be and considered a free man - In Witness whereof I have hereunto set my hand and seal this eighth day of August in the year of our Lord one thousand eight hundrend and twenty two. —

State of New Jersey }
Middlesex County } Be it remembered that on the eighth day of August 1822 before me James S. Primer one of the Justices of the Peace for the County aforesaid personally appeared James Parker known to me as the grantor in the written deed of Manumission & to whom I made known the contents thereof - who did acknowledge that he signed sealed and delivered same as his act & deed for the uses and purposes therein mentioned. —
James Skinner