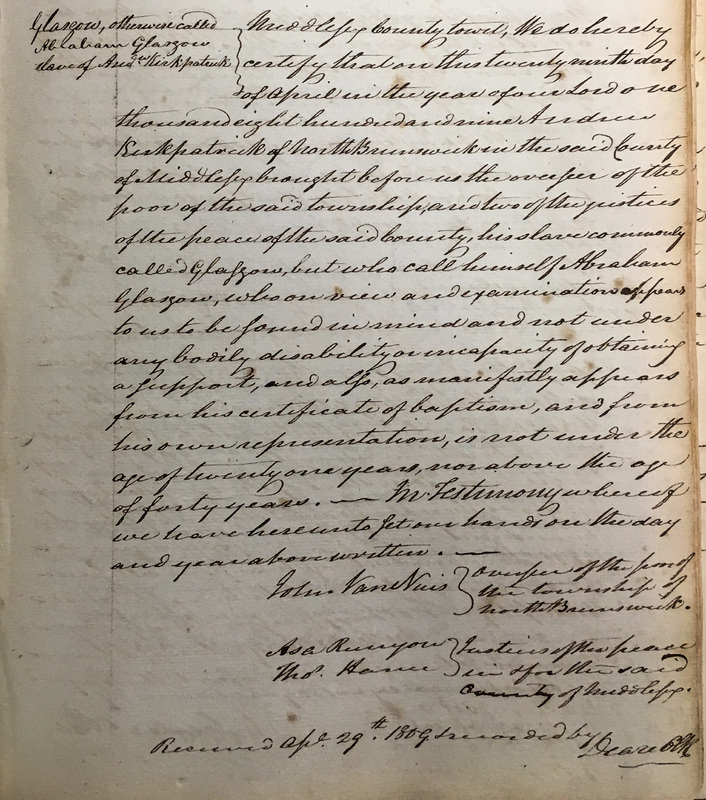 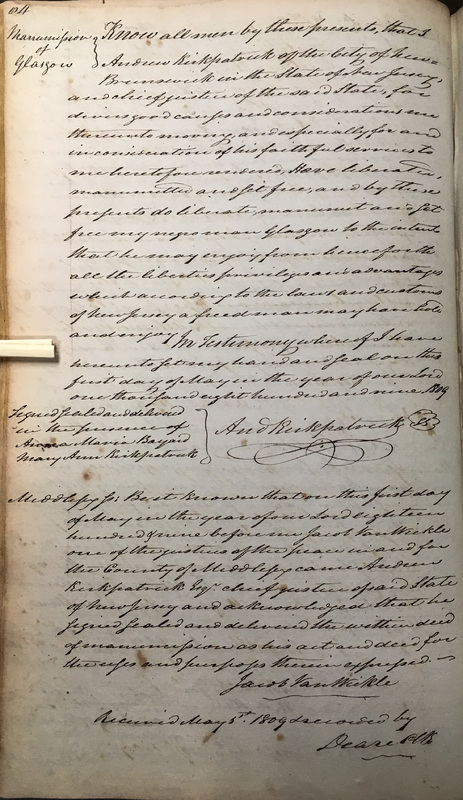 Slaveholder Andrew Kirkpatrick manumitted a man named Abraham Glasgow on May 1, 1809. Kirkpatrick and Glasgow appeared in court on April 29, 1809. The county officials examined Abraham Glasgow’s certificate of baptism to confirm that he was between the age of 21 and 40 years, but his exact age was not recorded by the court.

Glasgow, otherwise called }
Abraham Glasgow }
Slave of Andw. Kirkpatrick }
Middlesex County to wit, We do hereby certify, that on this twenty ninth day of April, in the year of our Lord one thousand eight hundred and nine Andrew Kirkpatrick of North Brunswick in the said county of Middlesex brought before us the overseer of the poor of the said township, and two of the justices of the peace of the said county, his slave commonly called Glasgow, but who call himself Abraham Glasgow, who on view and examination appears to us to be sound in mind and not under any bodily disability or incapacity of obtaining a support, and also, as manifestly appears and from his certificate of batpism, and from his own representation, is not under the age of twenty one years, nor above the age of forty years.— In testimony whereof we have hereunto set our hands on the day and year above written.

Asa Runyon }
Thos. Hance } Justices of the peace in & for the said county of Middlesex

Manumission }
of }
Glasgow }
Know all men by these presents, that I Andrew Kirkpatrick of the City of New Brunswick in the State of New Jersey, and chief justice of the said State, for divers good causes and considerations me thereunto moving, and especially for and in consideration of his faithful services to me heretofore rendered, Have liberated, manumitted and set free, and by these presents do liberate, manumit and set free my negro man Glasgow to the intent that he may enjoy from henceforth all the liberties privileges and advantages which according to the laws and customs of New Jersey a freed man may have hold and enjoy.
In Testimony whereof I have hereunto set my hand and seal on this first day of May in the year of our Lord one thousand eight hundred and nine 1809.

Middlesex ss: Be it known that on this first day of May in the year of our Lord eighteen hundred & nine before me Jacob Van Wickle one of the justices of the peace in and for the County of Middlesex came Andrew Kirkpatrick Esq. Chief justice of said State of New Jersey and acknowledged that he signed sealed and delivered the within deed of manumission as his act and deed for the uses and purposes therein expressed.—
Jacob Van Wickle