This collection consists of photographs, ephemera, student newspaper clippings, and other materials related to anti-apartheid activism at Rutgers. These materials were compiled by Scarlet and Black doctoral researcher Tracey Johnson from records held at Special Collections and University Archives.

In the late 1970s, the Coalition in Solidarity with South African Liberation (CISSAL) worked to educate the campus community about apartheid in South Africa through a series of Anti-Apartheid Reports and leaflets such as Life Under Apartheid and This is Apartheid! What Can We Do? The collection also contains photographs and newspaper clippings about the anti-apartheid rally organized by CISSAL in December 1977. In 1985, the Rutgers Coalition for Total Divestment (RCTD) organized divestment protests, which were documented in the Daily Targum student newspaper.


BROWSE all items in this collection 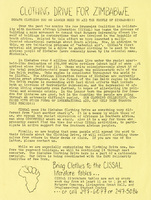 Flyer for a clothing drive organized by the Coalition in Solidarity with Southern African Liberation (CISSAL), a student anti-apartheid organization, circa 1977. 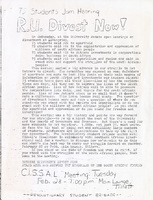 Flyer announcing a joint meeting of the Revolutionary Student Brigade and the Coalition in Solidarity with Southern African Liberation (CISSAL). The flyer also reports about the University Senate open hearings on divestment at Livingston College,…

This is Apartheid! What Can We Do? Flyer for Rally and Demonstration 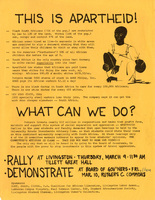 Flyer announcing an anti-apartheid rally at Livingston College (at Tillett Great Hall) and a demonstration at the Board of Governors meeting at Rutgers College Commons. The flyer provides information about apartheid and Rutgers investments in South…
View all 23 items