This collection contains a selection of images from the Scarlet Letter, the yearbook published by Rutgers College students. Included here are the photographs of the earliest African American students to matriculate at Rutgers. Each photograph appeared in the yearbook with a biographical note or a humorous poem written by the yearbook committee. These biographical notes provide information such as the student's hometown, activities while on campus, and plans for the future. Rutgers students had a tradition of roasting and teasing each other in the yearbook, often pointing out each others' perceived faults and shortcomings. Some issues of the Scarlet Letter contained a separate "Roasts" section. In 1908, a caricature of a black mammy figure introduced the "Roasts" section in the yearbook. By the late 1930s, the roasting and teasing culture waned, and the yearbook biographies focused more on the students' achievements and serious plans for the future.

View all items in this collection sorted by date.

Many of the yearbook photographs and biographies from this collection are featured in our alumni gallery. To learn more about the earliest black students at Rutgers College, visit the exhibit: Rutgers African American Alumni Gallery: The Forerunner Generation

Yearbooks at the University Archives

Original issues of the Scarlet Letter have been preserved by Rutgers Special Collections and University Archives as part of the Rutgers University Yearbook Collection, 1871-2005. Additionally, some older issues of the Scarlet Letter up until the year 1913 have been fully digitized and can be viewed at the Rutgers University Yearbooks website (James Dickson Carr RC1892 and Edward H. Lawson Sr. RC1908 are the only two black students who attended Rutgers before 1913).

Note that Rutgers had a somewhat unusual dating system for the yearbooks in the early twentieth century. Between 1886 and 1931, the Scarlet Letter  was compiled and published by the junior class, and the year printed on the cover of the yearbook identifies the junior class's expected graduation date. For example, the 1908 Scarlet Letter  edition contains junior photographs for the class of 1908 and senior photographs for the class of 1907. Thus, when looking for a photograph of a graduating senior, one would need to review the yearbook edition for the year after  the student’s graduation. Beginning in 1932, seniors took over the yearbook publication, and from that point forward, the Scarlet Letter  would feature senior photos for the current graduating class.

Caricature of a mammy figure from the Scarlet Letter yearbook 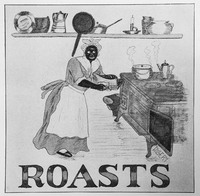 Page 175 from the 1908 Scarlet Letter (Rutgers College yearbook), introducing the "Roasts" section and featuring a caricature of a mammy figure in the kitchen cooking roast. The cartoonist's signature indicates that this image was created by Warren…

Junior photo of Edward Howard Lawson Sr. printed in the 1908 Scarlet Letter yearbook, page 64. Additionally, a note about Lawson on page 67, written in the form of a roast.

Senior photo of Paul Robeson with a biographical note, printed in the 1920 Scarlet Letter yearbook.
View all 32 items