New Brunswick served as a prime location along the Raritan River between the bustling port cities of New York and Philadelphia. It was a “hub” for trade and commerce during the late eighteenth and early nineteenth centuries. [1] But, it was also a popular place for slave trade, as well as a refuge for runaways and "free" black communities.

During this period, someone flipping through the cities newspaper would almost certainly see slave advertisements posted on the pages. Life for enslaved people living within the city was vastly different from their southern plantation counterparts. Slaves shared the city with the whites, as they were commonly used as house servants or errand runners outside the markets. [2]

For runaways, the large black population of New Brunswick during the mid-nineteenth century served as a valuable resource. During this time, New Brunswick became an important section of the underground railroad. Due to all of these favorable factors for runaways, New Brunswick turned into a hotspot for slave hunters looking for slaves fleeing to the north. Many of these slave hunters were self appointed, and all of them were looking to enforce The Fugitive Slave Act of 1850. They were known to stalk the footbridge that started from Albany street and spanned east across the Raritan River. The Raritan represented the last leg of a runaway's journey. [3]

There were others, however, that were considered to be free. But the documentation of the black community was heavily policed. It was white men who generally took record of the black civilians, either through newspaper mentions--including “wanted” posts and other remarks--or through baptism records. [4] From what is known about the culture during this time period, it is safe to say that New Brunswick was still a place of racism and hostility, even to those who were technically “free”. [5] 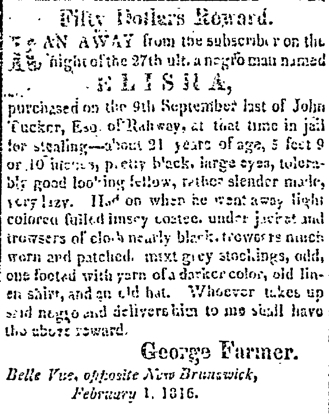 A typical wanted memo that was written into newspapers.