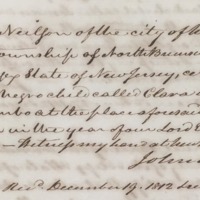 “That every child born of a slave within this state, after the fourth day of July next [July 4, 1804] shall be free; but shall remain the servant of the owner of his or her mother, and the executors, administrators or assigns of such owner, in the same manner as if such child had been bound to service by the trustees or overseers of the poor, and shall continue in such service, if a male, until the age of twenty-five years, and if a female until the age of twenty-one years.”[1]

This Act was enacted in order to protect the property rights of slaveholders first and foremost.  The act also provided an opportunity for slaveholders to have the continued use of enslaved peoples born before 1804, as well as the use of their children, who would be considered “slaves for a term” or a slave until the age of twenty-five for men, and twenty-one for women.  The Act for the Gradual Abolition of Slavery in New Jersey changed the dynamics of the slave market in New Brunswick, Middlesex County, and the larger state of New Jersey. The sale of enslaved women became more important to both the intrastate and interstate slave trades in New Jersey, because by law, their children would be considered their master’s property until the child’s early adulthood. The wombs and newborn children of enslaved mothers became more valuable in a state with a gradual abolition code.

Many young, enslaved women both with and without children were sold both within and across state lines. Slaveholders knew that their ability to bear children could be easily commodified, and made a profit by selling their enslaved women, as well as their children, before the children reached the age of abolition.[2] Interstate slave trading became an important facet of enslavement in New Brunswick. Slaveholders in New Jersey could make a greater profit by selling their slaves to southern slaveholders because there, they would be considered slaves for life, according to southern state laws.  Slaves, and their children - who in New Jersey may have been granted freedom by their twenties - who had formerly lived in New Jersey were sold to slaveholders in Louisiana and Mississippi where no matter their previous status, they would be considered slaves for life.[3]

The Act for the Gradual Abolition of Slavery in New Jersey blurred the boundaries of enslavement and freedom for African Americans, but slavery in New Jersey was not truly abolished until the passage of the Thirteenth Amendment to the Constitution, “Neither slavery nor involuntary servitude, except as punishment for crime whereof the party shall have been duly convicted, shall exist within the United States, or any place subject to their jurisdiction.”[4]