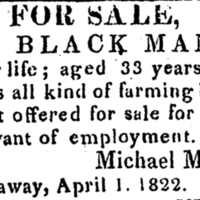 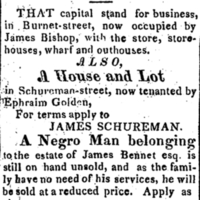 For Sale or Rent. A Negro Man. ames Schureman (Queen's College alum and trustee) offers to sell an enslaved man at a discounted price. The enslaved man belongs to the estate of the late James Bennet. Schureman also offers several real estate properties for sale or rent. Date: 1822-02-28. 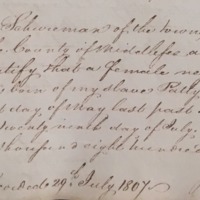 Through the research that The Scarlet and Black Project has done, some narratives of the lives of enslaved individuals in New Brunswick have been uncovered. Shown above are slave sale advertisements as well as a birth record for enslaved people across multiple generations.

New Brunswick newspapers offer slave sale records, which help to narrate the lives of enslaved individuals, who owned them, and the lives they may have led.  Pictured above are the slave sales for two enslaved men.  The first advertisement lists a man for sale or rent by owner, James Bennet.  The enslaved man for sale or rent, may be elderly, because his owner is willing to sell him at a "reduced price."  The second advertisement lists a thirty-three year old man who "understands all kind of farming business."  These men were considered slaves for life rather than slaves for a term.  Their lives may have parallelled, they were most likely born to enslaved mothers, and performed physical labor at their estates.  The older slave being sold at reduced cost, would have been considered less valuable, because of a lower ability to perform the physically demanding labor that he was most likely perormed his entire life.  The younger man was to be sold to perform physical farming labor.  He would be sold at a higher profit becuase of his age, skill set, and farming knowledge.

In New Brunswick the majority of slaves were female at 59%, while an even greater majority of advertisements for slave sales were for the selling of women. During these years female slaves at childbearing age were a more valuable commodity, as they could be used by slave owners to produce more slaves and for labor that was not considered for male slaves. [1] This would lead to a huge difference in the life of a young slave girl named Phillis, whose birth record shows she was born to an enslaved mother after the 1804 Act for the Gradual Abolition of Slavery in New Jersey. Her usefulness and profitability as a female slave would certainly determine certain aspects of her life, as some owners may want her for her “womanly labour” such as domestic housework, physical farm labor, and reproductive labor. This emphasis on the value of reproductive labor led to families being torn apart, as often, women, sometimes with or without their children were sold away to varrying owners. Although this young woman, Phillis, may eventually have been freed once she reached an older age, however, this would not protect her from enslavement until the age of twenty-one, and the experiences she would have had. [2]