In the early nineteenth century Dr. Jacob Dunham treated enslaved men, women and children. He charged the fees for his services to the family accounts of their masters and mistresses. Dunham’s records point to the illnesses, injuries, violence, and preventative care enslaved black people experienced during this time period. 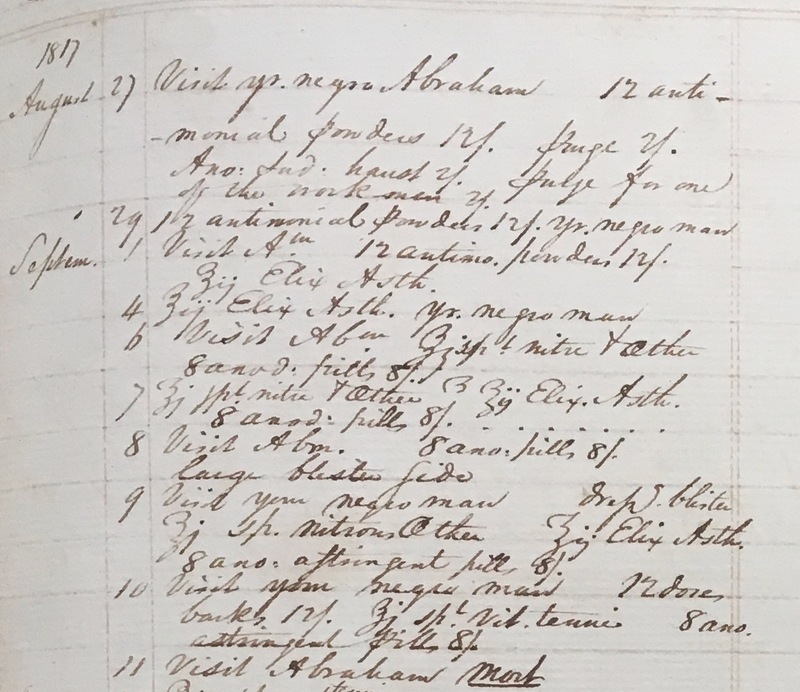 Dunham's record of treament for Abraham

Dunham treated African Americans within the town of New Brunswick, but would also travel to farms outside of the city. For example, Dunham cared for several patients enslaved by James Commelin.

James Crommelin owned “a certain farm or plantation, situate in North Brunswick, in the county of Middlesex... bounded on the south-west by the public road leading from New-Brunswick to South river bridge.” 1  On August 27, 1817 Dr. Dunham paid a visit to Crommelin’s “Negro Abraham” providing him with antimonial powder and a purge (inducing a bowel movement). On this same day Dunham also purged one of Commelin’s “workmen,” so it is possible there was an illness going around the property. On August 29th, Abraham received more antimonial powder. On the 1st of September Dunham returned, this time administering antimonial powder and “Elix asth.” 2 The doctor made seven additional visits to Abraham from September 4-11 treating a large blister Abraham had developed on his side. On Dunham’s last visit to Abraham on September 11th, Dunham reported a mortality and did not charge Crommelin for Abraham’s treatment. 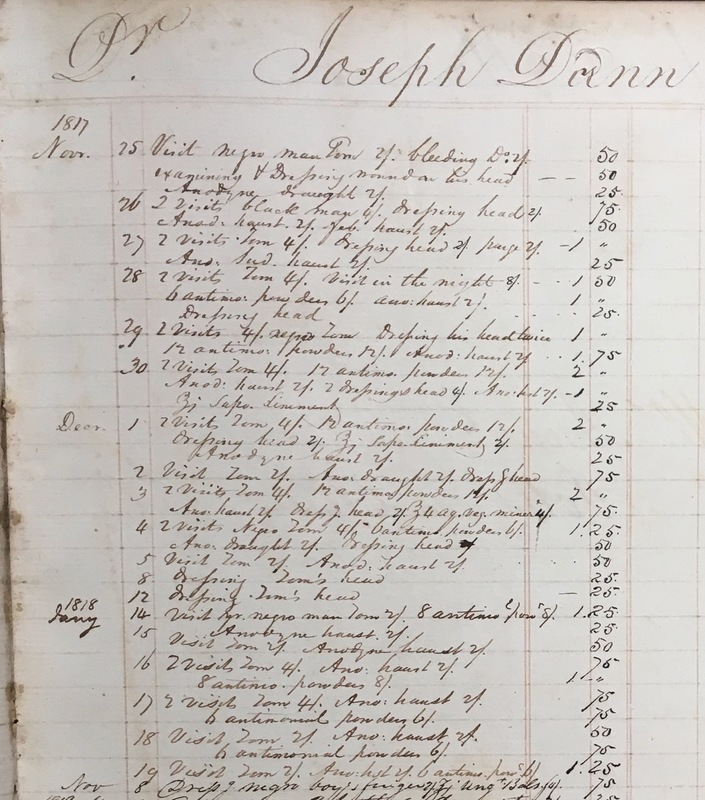 Dunham's record of treatment for Tom

Enslaved blacks also received medical treatment for injuries they likely sustained through their work as forced laborers. On November 25, 1817 Dunham recorded charges to the account of slave-owner Joseph Dunn for “visit negro man Tom...bleeding ...examining & dressing wounds on his head.” (Bleeding, or bloodletting, is the withdrawal of blood from a patient to prevent or treat illness. Bleeding patients was a common medical practice up until the late 19th century.) It is not certain how Tom injured his head, but it is possible that he was injured while performing labor for his owner.

Tom's wounds must have been very serious. Dunham visited Tom almost everyday between November 25 and December 12, 1918 to change the bandages on Tom's head and provide various treatments and medicines including purges, draughts, and powders. Some days the doctor would make two visits to change Tom's bandages. On one occasion Dunham made a nighttime visit, which cost twice as much as a visit during the day. Tom still was suffering almost a month later, when Dunham made several visits to him in mid-January 1818. In total, Joseph Dunn paid the doctor $28.25, a significant sum, for treating his enslaved man Tom. Dunn’s attentiveness to Tom’s health could have been because he cared about the health and comfort of his slave, or because he was trying to protect his investment and preserve the monetary value of Tom.

Some of the injuries African Americans experienced were likely due to violence inflicted by the hands of whites, either their owners or other locals. For instance, on July 14, 1817 Jacob Dunham charged Levi Pricket’s account for “dressing posts negro boy’s eye at your request/ hurt by your wife.” It seems Mrs. Pricket had somehow injured a black boy enslaved or indentured to the post office.

Enslaved blacks also received preventative healthcare. For example, on August 20, 1827 Dunham charged Higgins the tavern keeper for “vaccinating black boy.” Likewise, on August 14, 1827 Harry Skillman was charged for “vaccination for yourself and 2 colored children at your house at your request.”